Welcome to our Class 2 page! 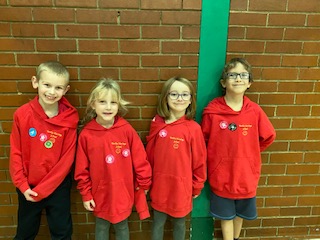 Children from Class 2 went to The Pemberton Centre in Rushden to compete in a Curling competition against other local schools. The children played against children from Great Doddington , Earls Barton, Bozeat, Stanwick and Denton. The aim of the game was for the child to get their stone onto the target on the floor. The children did this by sliding their stone from a standing or sitting position whilst making sure they stayed behind the line. The group with the most stones on the target won and received the winning points. The children had a great afternoon competing in a sport that they had not played before. Ahoy! Class 2 had a fabulous day being pirates as part of our 'Reading Federation Day'. We started off learning all about pirates and we found out our pirate names. Next, we had to solve the riddles to find the hidden treasure on the pirate ship! We sang lots of pirate 'shanty' songs and finished the morning off with a visit from the wonderful author, Lou Treleaven. Lou read us 'The pirate who lost his name' and the children asked lots of inspiring questions about her role as an author and the books she has written. As well as creating our own treasure maps, walking the plank in PE, the children read with Class 4 which was fascinating to watch. Finally, we finished the afternoon off with book and biscuit where parents came in to read to the children.